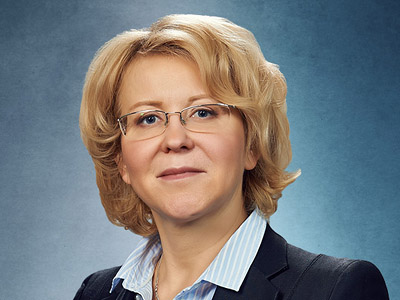 July the 1st, 2019, Moscow. – Following the resolution by the Central Bank being the sole shareholder of JSC RNRC, on July 1, 2019 Natalia Karpova was appointed as RNRC President, Chairman of the Board. Previously, she had held the position of Deputy Chairman of the Board and had been in charge of underwriting and reinsurance contracts.

“It is a great honor and responsibility for me to lead RNRC, the company that has evolved to be the epicenter of insurance expertise for almost three years of existence thanks to its highly professional employees. I am grateful to the Central Bank for the confidence they have placed in me and in our team. As before, our strategy will continue to rest on safeguarding property interests of the Russian nation, businesses and citizens, as well as on ensuring the financial stability and effective growth of the Russian insurance market and its integration into the global insurance environment,” said Natalia Karpova.

Natalia V. Karpova graduated from the Gubkin Russian State University of Oil and Gas and is also an alumna of Chartered Insurance Institute (London). In 1995-2000, she worked for Jardine Insurance Service, HSBC Gibbs and Seascope Limited and after a few years she took the position of Deputy Director General Property & Liability Insurance at AlfaStrakhovanie PLC. In 2005, she became Executive Vice President of Renaissance Insurance Group Ltd and was in charge of the entire corporate services unit, including product development and sales to corporate customers to loss settlement and reinsurance. In October 2016, she was appointed RNRC Deputy Chairman of the Board, Director of Underwriting and was named Russia’s best corporate insurance professional by the Career magazine for three consecutive years (2010-2012).


Russian National Reinsurance Company Joint-Stock Company was established pursuant to Federal Law No. 363-FZ dated July 3, 2016 “On Amending the Law of the Russian Federation ‘On Organization of Insurance Business in the Russian Federation’" by decision of the Board of Directors of its sole founding member, the Central Bank of Russia, who owns 100 percent of the company stock. The Company’s paid-up authorized capital is RUR 21.3 billion. Reinsurance License PS No. 4351 dated October 12, 2016. ACRA rating: ААА (RU), Stable outlook. In 2017, RNRC posted RUR 7.6 billion in premiums.