The Russian reinsurance market is undergoing significant changes. At the end of Q1 2017, the volume of insurance premiums for both inward and outward reinsurance has decreased.

A 25% drop in reinsurance premiums transferred to international markets has had a significant impact on contraction of the outward reinsurance market this year. In Q1 2015, RUB 27.7 bln was transferred abroad; in 2016, the volume of the premium transferred outside the Russian Federation grew up to RUB 31.2 bln, and­­ at the end of Q1 2017, it dropped to RUB 23.5 bln. At the same time, the internal Russian outward reinsurance market remained virtually unchanged since 2016, but declined by 27%, from Q1 2015.

With written premiums of RUB 1.2 billion, RNRC has been ranked third among the market leaders – Ingosstrakh (premiums of RUB 2.3 billion) and SOGAZ (RUB 1.5 bln). 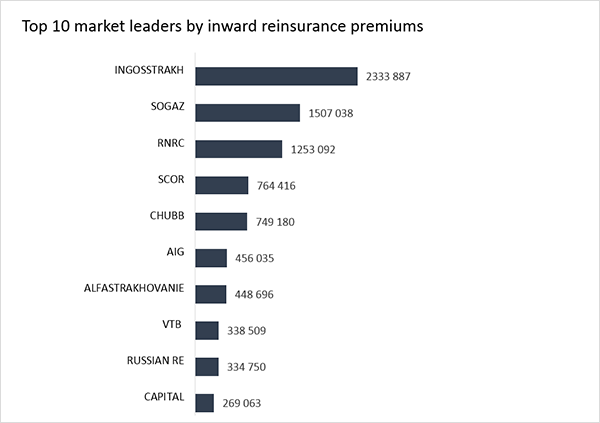 In Q1 2017, the RNRC’s share in the inward reinsurance market was 12.9%, and its share in the volume of premiums transferred to reinsurance was only 4.3%, which is much less than the statutory rate of the obligatory cession with RNRC, which is equal to 10%.

Nikolay Galushin, RNRC President: “We expected that, in connection with the entry into force of the law on January 1, 2017, a part of the liabilities under insurance contracts starting on January 1, 2017 would be placed in reinsurance as early as at the end of 2016, that is before the entry into force of the requirements for obligatory cession, but we did not expect that the difference would be so big, given the fact that the Company's portfolio contains contracts with a share significantly exceeding 10% of liabilities ceded to reinsurance. A full and detailed analysis of the market by participants and types of insurance will enable us to determine the reasons for such a significant difference.”

In June, RNRC will present a detailed analytical report on the structure of the reinsurance market.

RNRC was established by the Central Bank of Russia, pursuant to the Parliament law on the mandatory cession for all Russian insurance companies. 10% of every Russian risk transferred to reinsurance should be offered to RNRC. As for the shares in the risks of the companies that are under the international sanctions regime, RNRC must take them for reinsurance in the amount of 10%. RNRC is allowed to undertake all other risks according to its own underwriting policy. Paid-up capital of the company is RUB 21.3 billion. Recently, the Russian Analytical Credit Rating Agency assigned RNRC the AAA (RU) rating with the stable outlook.